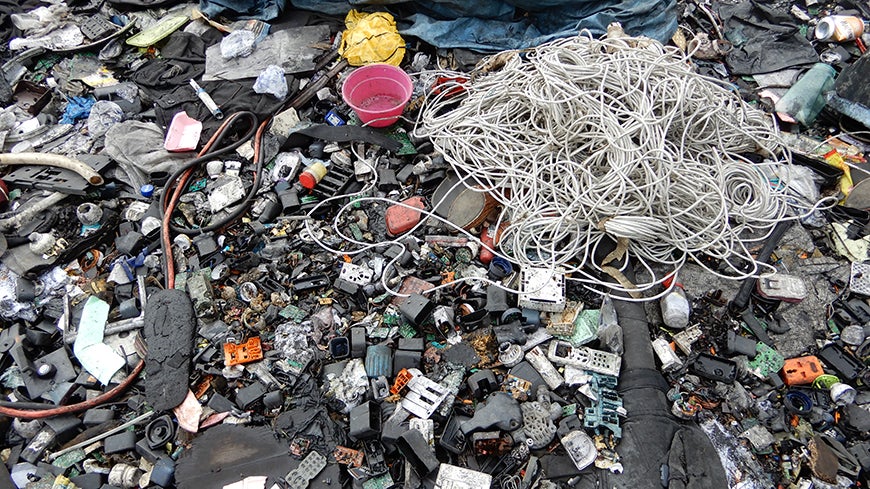 Nigeria is one of the world’s top destinations for electronic waste. But what happens when it gets there? Photo: Irene Galan/UN Environment.

It’s close to midnight on a Sunday and the skies of Lagos hang dark over the glittering lights of the city’s 17.5 million residents. One of those lights is small fire in a field in Ikeja, the capital of Lagos State, where 24-year-old John stands, tossing cables into the flames.

“I’ve been coming to this place for almost six years now, I like it because when I am here nobody disturbs me,” John says. He is one of the hundreds of informal ‘pickers’ who make a living scavenging saleable materials from the Odo-Iyalaro scrapyard, home to a thriving informal market for electronic waste. It’s the end of the weekend and he is burning plastic cables to access the copper wires at their core. The practice is illegal, but John is confident that the police won’t check the yard today, giving him precious time to build a store of metals he will sell the following morning.

Nigerian law prohibits burning plastic cables, as well as acid leaching and other common methods used by John and his fellow pickers to reclaim valuable metals from discarded electronics. But minimal enforcement and a low awareness of the risks they are running means most pickers continue to regularly expose themselves to toxins that cause respiratory and dermatological problems, eye infections, neurodevelopmental issues, and, ultimately, shorter lives.

Restricted but on the rise

While international agreements like the Basel Convention prohibit the import of hazardous waste, unscrupulous importers and a porous customs system mean Nigeria now ranks alongside Ghana as one of the world’s leading destinations for electronic waste. The country receives 71,000 tonnes of used consumer goods through the two main ports in Lagos from the European Union and other more industrialized economies every year.

“Some of the e-waste from abroad is comprised of cathode-ray TVs, which contain lead, as well as refrigerators and air conditioners containing hydrochlorofluorocarbons, making it a threat to those who are dismantling and dealing with the products,” the UN Environment Programme’s Eloise Touni says. Plastic components, including hard casings and cables, also contain persistent organic pollutants used as flame retardants, such as polybrominated diphenylethers (PBDE). These were banned by the Stockholm Convention due to their long-lasting global impacts and are regularly detected in ecosystems and people all over the world, including in Arctic wildernesses and their traditional inhabitants.

“Nigeria is an attractive destination for waste exporters, partly due to the limited enforcement of import restrictions and other regulations,” Touni says.

Often hidden or falsely declared, electronic waste enters Nigeria through two ports in Lagos and over land routes from neighbouring countries before finding its way to sites like Olusosun, Nigeria’s largest dumpsite. With 100 acres filled every day by 10,000 tonnes of rubbish, including e-waste, Olusosun is a scavengers’ heaven, busy with pickers searching for waste they can break down and sell on the informal market.

“I’d like to do something else… but I can feed my family with this job,” says mother-of-four Malaiah, as she crouches over an old computer, breaking it down with a small hammer to extract as much metal as possible. “I get 10,000 naira a week. My children are all in school, my eldest is in university.”

Touni says that as pickers work on an individual basis, scavenging directly from dumpsites, they can undercut the limited formal recycling operations that exist. But their competitive edge comes at a personal cost—frequent injury and daily exposure to poisonous leakages and emissions from the waste they break down by hand.

Alongside the raw materials they sell at markets like Odo-Iyalaro, pickers sell more valuable components to informal recyclers, whose shops are located in Computer Village, the largest technology accessories market in Africa. In sweltering rooms above its chaotic streets, engineers repair computers, mobile phones and screens using the parts provided by the pickers, before selling them on to both local clients and foreign markets.

“I buy loads at 2,000 or 3,000 naira per kilogram. I can’t tell you how much I sell them for, but I give them to somebody that takes them to Germany, Turkey and China,” one of the shop owners says.

The costs of ethical recycling

Thanks to their overall low costs, informal recyclers play a competitive role in the international market, where scrap and component buyers often choose them over their registered competitors.

“The informal sector doesn’t incur costs in tax, power, labour costs or incorporation legalities. It will always be the highest bidder for waste to process,” says Adrian Clews, Chief Executive Officer of Hinckley Recycling, one of Nigeria’s two registered electronic waste recyclers and a partner with the National Environmental Standards and Regulations Enforcement Agency on the Circular Economy project.

In collaboration with Verde Impacto, a recovery and recycling company specialized in post-consumer recycling, Hinckley has started to incorporate informal pickers into their business, providing them with training and protective equipment, alongside health services, insurance cover and bank accounts. However, the company struggles to offer competitive rates to beat what pickers can make on the informal market.

“The company can pay the same as the informal market only if additional funding is available,” says Clews, “but without extended producer responsibility legislation we are fighting a lost battle.”

Extended producer responsibility legislation tasks manufacturers with responsibility for their products throughout their lifecycle—emphasizing extended use, waste prevention, recycling and recovery—with the aim of minimizing the impact of consumer electronics on human health and the environment.

In Nigeria, the application of existing extended producer responsibility legislation has so far been hampered by the complexity of the local market and the lack of an industry-wide body to support increased formalization of the recycling sector.

Raising awareness on the impacts of hazardous e-waste and improving the implementation of Nigeria’s extended producer responsibility legislation are amongst the first steps being taken by the Nigerian government and partners under the Circular Economy Approaches for the Electronics Sector project. The project will also contribute to the development of best cases and approaches for implementing the Circular Economy in Nigeria and Africa. The National Environmental Standards and Regulations Enforcement Agency Director General Aliyu Jauro is confident the initiative will “sensitize workers, embrace the best practices, support the private sector and lead Nigeria on its way to a circular economy approach in the e-waste sector.”

Walking below the city’s starless sky, John has only heard about the changes ahead for the waste sector. Being a picker isn’t a choice—he aims to become a recycling engineer. Tonight, the air is too polluted to make a wish on a falling star. But, with change in the wind for Nigeria’s e-waste recyclers, in three years, the Lagos skies will be a little clearer, and John might just have the chance to make his dream come true.

This piece was originally posted by UN Environment.