From mangrove to mountain: Building coastal resilience in Timor-Leste 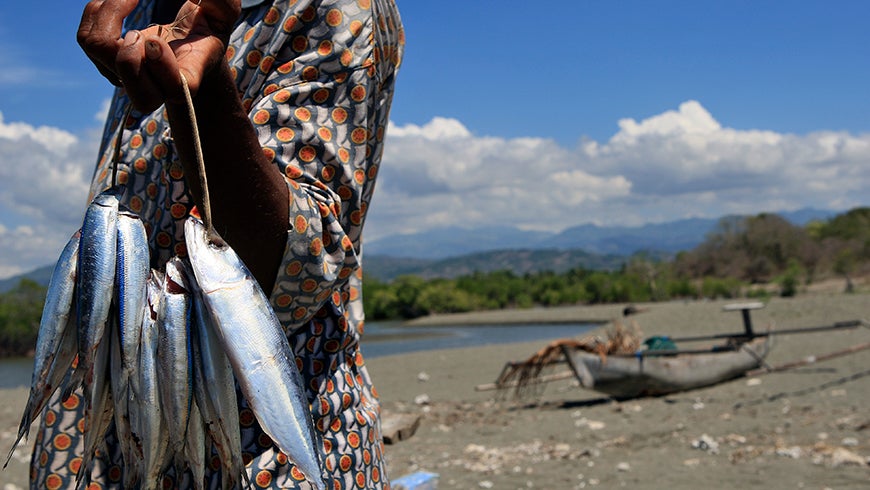 At the heart of the Coral Triangle – the global center of marine biodiversity – lies the small island developing state of Timor-Leste.

Indigenous legend holds that Timór Lorosa'e (‘East Rising Sun’) was created by a great crocodile, Lafaek Diak, that transformed itself into land so that its human friends could live there.

Imposing mountains – the spine of the mythological crocodile – dominate the center of the country. Ancient marine fossils litter their peaks.

Around two-thirds of the nation's people live in the narrow plain running along the country’s coastline, primarily making their living through fishing and farming.

Offshore, in the rich waters of the Coral Triangle, is a powerhouse, reef-building coral biodiversity hotspot, sometimes called 'the Amazon of the seas' due to its natural abundance and importance as habitat for marine species.

When it rains in the mountains in Timor-Leste, water barrels towards the coast at rapid speeds, filling the usually dry riverbeds.

Replenishing groundwater aquifers and feeding crops, the influx is usually greeted by farmers.

But the deluge of water is not always welcomed.

With the onset of climate change, flash floods are becoming more common and severe, damaging private and public property, farmlands, and irrigation channels.

Conversely, while sometimes the issue is too much water delivered too quickly, sometimes there is simply not enough water to go around.

Downstream, the coastal plains receiving the deluges are threatened also by rising sea levels and loss of mangrove wetlands – both crucial to people’s livelihoods and mitigating the impacts of climate change. 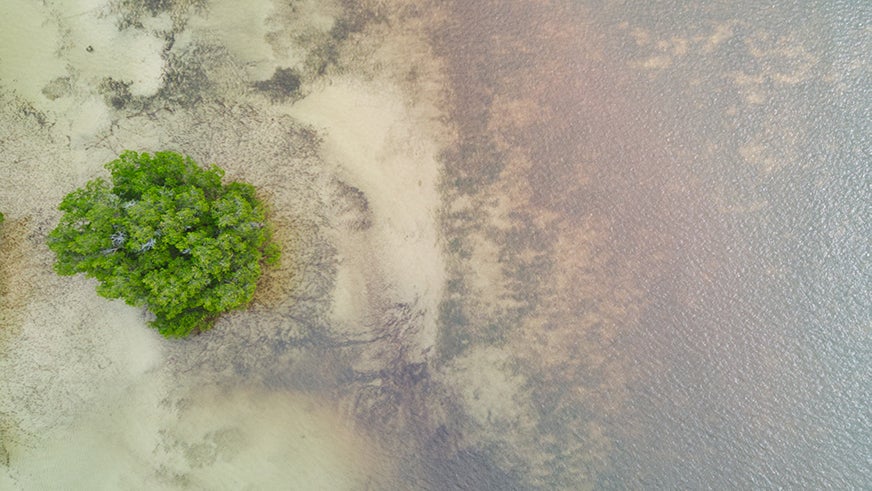 Funded by the GEF's Least Developed Countries Fund, the Coastal Resilience Program is Timor-Leste's largest ever effort to conserve coastal ecosystems, with a view to protect people's livelihoods and forge more resilient communities in the face of climate change.

Implemented by the United Nations Development Programme (UNDP) in partnership with the Ministry of Agriculture and Fisheries, the program has been working on a national level and locally within seven of Timor-Leste’s municipalities – Dili, Liquiça, Bobonaro, Covalima, Manufahi, Manatuto, and Viqueque – to enact nature-based approaches to coastal protection and to develop supportive policies and institutional capacity.

Upstream, on-the-ground, the program has focused on complementary land management measures with the planting of species such as casuarina, acacia and vetiver grass along riverbanks and on steep slopes.

Since 1940, Timor-Leste has lost 80 percent of its mangroves. Environmental factors, including sea level rise, more frequent storms, saltwater intrusion, and upstream sedimentation, are compounded by anthropogenic pressure, coastal development, and animal grazing, all of which expose the coastline to even greater risks.

Many communities living close to mangroves have not been aware of the importance of their functions and value. With few other options, they have often used them for fuel wood, construction, and grazing animals. In the alternative, many communities have cleared their mangroves for aquaculture and salt pond projects. 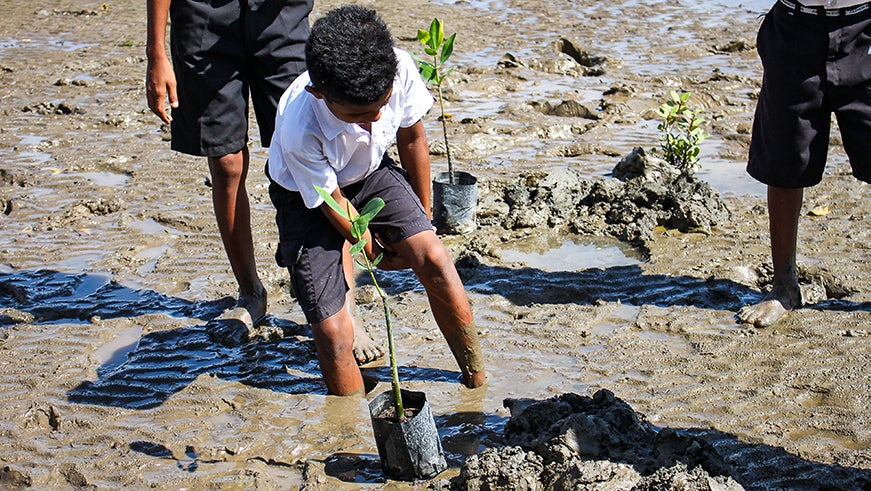 One child, one mangrove

Rehabilitating Timor-Leste's mangroves has been a key focus of the Coastal Resilience Program and since its inception in 2016, nearly 2,000 hectares of mangroves and wetlands have been conserved and restored on Timor’s north and south coasts.

More than 82,000 mangrove seedlings have been planted to restore at least ten hectares; over 50,325 meters of protective fencing installed; and local customary regulations, 'tara-bandu', established in 12 sucos (villages).

Local schools have mobilized their students in planting, to make them stewards of the forests and to educate them on the ecosystem's importance to their communities.

Households and youth have also been involved in activities such as planting more than 17,345 multi-purpose trees, including jack-fruit, orange, papaya, mahogany, citrus, sandalwood, and coconuts.

Communities that once considered each other only distantly related now share connections and interests along the length of their waterways.

"We who are close to the mountains need to reforest, planting trees to regain mountain water resources...if we are not aware and do not protect nature, it will greatly affect us humans..." – Ricardo de Araujo, Xefe Suco (village chief) of Tomanamu in Same, on Timor-Leste's southern slopes

To identify key areas of mangrove loss and vulnerability, and to identify potential areas for mangrove restoration, the program has undertaken detailed mapping of the country’s coastline ecosystems, some of which had never been comprehensively examined before.

Approximately 4,775 hectares of mangroves have been mapped across 11 districts.

Under the program, the Ministry of Agriculture and Fisheries has also established monitoring systems.

By 2021, the Ministry will be equipped with a mangrove sustainability lab that will host mapping and geographical information system (GIS) data.

Under the project, government and civil society members have been trained in data collection and management for the future monitoring of mangrove forests. 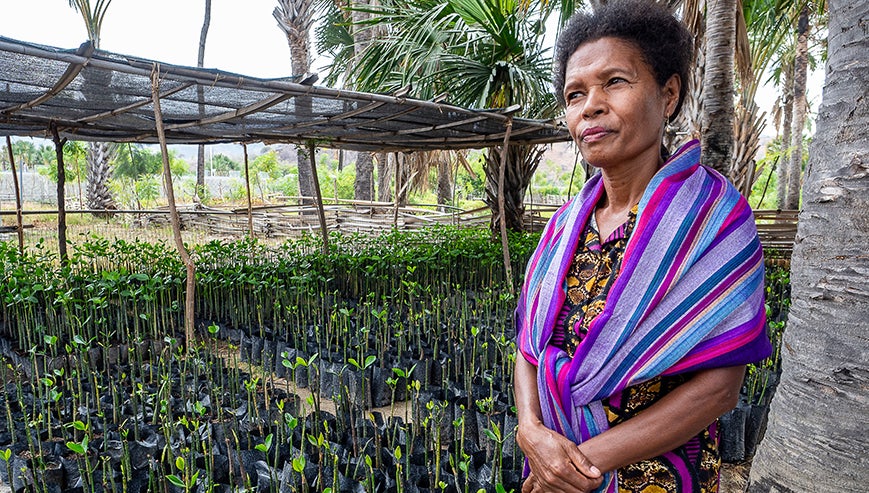 As well as focusing on mangroves, the program has prioritized giving people sustainable alternative livelihoods, which will be key to protecting Timor-Leste’s mangrove forests into the future.

Under the project, more than 1,031 households have been supported with various diversified livelihood activities.

For traditional industries like fishing, the project has trained fishers on how they can process and transport their catch to market more efficiently, to limit lost income.

Community engagement across the seven municipalities has informed people of the value of healthy coastal ecosystems and involved them in the protection and restoration of mangroves.

From the north coast town of Ulmera and the southern mountain town of Same, local community groups have led efforts to restore degraded mangrove sites.

Community-based theater groups have proved an engaging and entertaining means of informing communities about the importance of looking after mangroves in specific, and waterways more generally.

"I know that from Mount Ramelau to Kablake, many forests have been destroyed by irresponsible people, causing drought. Everywhere we lack water, and many animals are dying in the forest because there is not enough food. This performance helps the community not to repeat the same mistakes in the future.” – Mr. de Araujo

Ecotourism attractions like mangrove conservation facilities and boardwalks are in the process of being established. 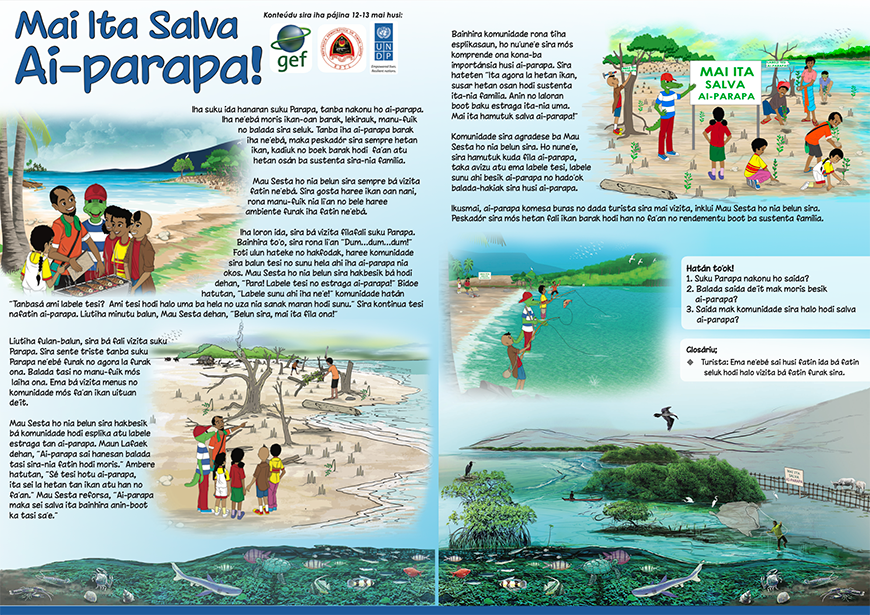 More than 200,000 people have been reached through community theater, schools, and Lafaek magazine.

The program has incorporated the Timorese traditional law concept of Tara Bandu to protect trees from community harvesting. Tara Bandu uses community-generated social contracts that regulate people’s relationships with each other, animals and the environment.

Looking to the future

When aware of the value of leaving mangroves standing – and when given alternatives to cutting them down – local communities prove to be the mangroves' best protectors.

Recognizing this dynamic, the Coastal Resilience Program has successfully adopted a community-based approach to saving one of the country's greatest natural assets.

As it enters its final year, the program continues to raise public awareness and to support alternative livelihoods, with a focus on the policies and national capacity required for climate-resilient coastal management into the future.