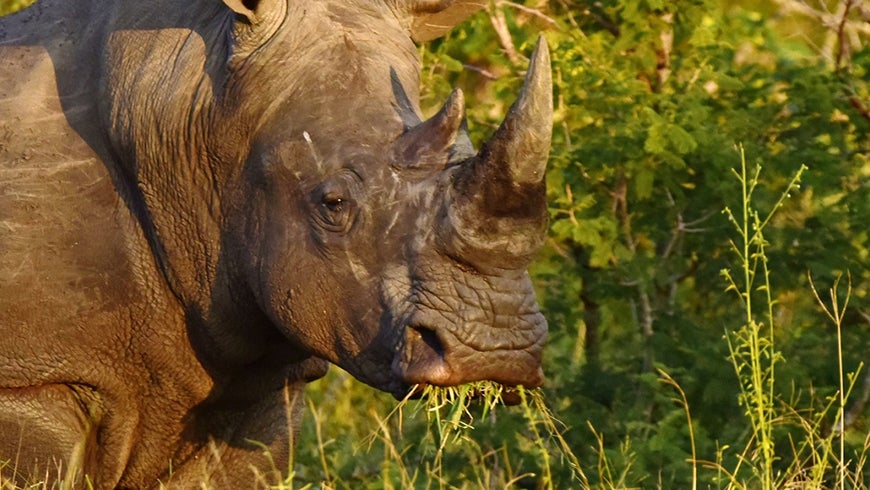 The coronavirus pandemic is forcing us to think deeply about human beings’ relationship with the natural world on which we all depend for our survival.

Many commentators, including Inger Andersen, Executive Director of the United Nations Environment Programme (UNEP), say humans are putting too many pressures on the natural world. She has warned that failing to take care of the planet means not taking care of ourselves.

Sound and sustainable wildlife management is, therefore, likely to receive greater attention in the post-COVID-19 world. Here’s one example of an ongoing project in South Africa.

Kruger National Park, a flagship national park, is almost the same size as Belgium. It’s a haven for wildlife and a cornerstone of South Africa’s tourism economy, but the park and the communities around its borders represent the global front line in the battle against rhino poaching: there are increasingly militarized clashes between park rangers and poachers.

One of the reasons for this is that rhino horn is worth more than its weight in gold, and for many impoverished people in rural South Africa and beyond, that’s an irresistible draw.

One Global Environment Facility-backed project, part of the Conservation Agreements Private Partnership Portfolio, sought to reboot the relationship between park administrators and local people. Led by UNEP and Conservation International with partners Meat Naturally, Kruger to Canyons Biosphere Programme, South African National Parks, and the University of Pretoria, the project, The GEF Earth Fund: Conservation Agreement Private Partnership Platform, aimed to move towards a new model for combating poaching - one that works with the local community instead of against them, by valuing cattle as well as rhino.

Before the project, marginalized cattle farming communities living around the park were understandably ambivalent about wildlife protection. They were focused on their cattle which is their livelihood, their job, their food source, and their bank account. In fact, because wildlife and livestock coexist here, foot-and-mouth disease prevented any real cattle economy from taking hold. Communities could not easily sell livestock in the Kruger landscape, so wildlife itself was perceived as a threat to local livelihoods.

"The idea was that if we can help marginalized cattle farmers improve grazing conditions and earn decent incomes, they would become more active conservation partners and potentially be less likely to turn a blind eye to, facilitate or participate in rhino poaching," says Zachary Wells of Conservation International.

“To help biodiversity, ecosystems, and communities thrive we need to tackle wildlife crime and at the same time open up new opportunities for local communities,” he adds.

Michael Grover, Landscape Director at Conservation South Africa, recalls at the beginning of the program a community elder being asked for assistance in countering the growing poaching threat. The elder said, “You don’t value what we have. Why should we value what you have?” His solution: “You look after our cattle and we’ll look after your rhinos.”

The resulting conservation agreements model has now been formally recognized by the Government of South Africa as a viable stewardship model for communal land management.

Among the project’s beneficiaries are the livestock-dependent Mnisi community adjacent to Kruger National Park.

Under the project, communities practice environmentally friendly ways of grazing their livestock and, in exchange, receive negotiated benefits such as education around market access, fodder, livestock branding and capacity-building.

The project negotiates with livestock owners to restore the ecosystem services of 9,000 hectares of degraded Mnisi rangelands (equivalent to around 13,000 soccer fields).

“Planned grazing helps restore vegetation cover, ensures adequate forage throughout the grazing season, increases infiltration, and decreases erosion,” says UNEP biodiversity expert Ersin Esen. “This results in improved quality and quantity of grazing for livestock - as well as improved ecosystem health for communal rangelands and the rivers that flow through them into Kruger National Park.”

Rangeland restoration model to be replicated in other countries

Conservation South Africa has made a long-term commitment to continue working with communities. The Kruger to Canyons Biosphere program, in partnership with Conservation South Africa, have received five years of funding from the Flanders government in Belgium to expand conservation agreements to neighboring villages, as a direct result of the successes they have seen through investment in Mnisi.

“Finding solutions that promote restoration and conservation of healthy ecosystems whilst addressing societal inequities here in South Africa can be a model not only for the continent, but for the world,” says Sarah Frazee, Climate Project Director for Herding 4 Health.

“As we continue to relentlessly encroach on nature and degrade ecosystems, we endanger human health,” says UNEP’s Inger Andersen. “In fact, 75 percent of all emerging infectious diseases are zoonotic, i.e. viruses originating from the transfer from animals, whether domesticated or wild, to humans.”

Material for this story was drawn from a four-part story series by Conservation International which was supported by the Global Environment Facility Earth Fund, in collaboration with UNEP as implementing agency, as part of the Conservation Agreements Private Partnership Platform.

What to watch on World Wildlife Day 2020

International Women's Day interview: 'I cannot help but be hopeful'