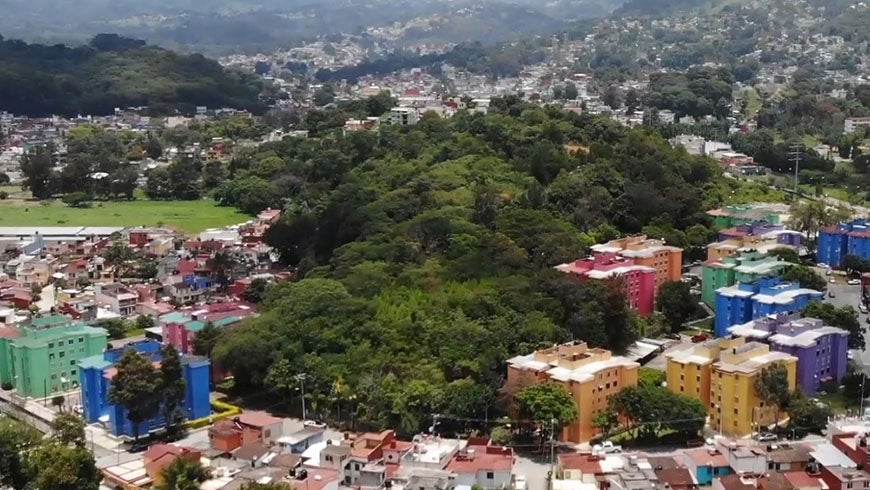 Local authorities are partnering with UNEP to restore and protect large areas of cloud forest around the Mexican city of Xalapa under the GEF-backed CityAdapt project.

The Mexican city of Xalapa is surrounded by ecosystems that not only harbor stunning flora and fauna, but also provide crucial services to the city and its 580,000 people.

The cloud forest, an indigenous mountain rainforest neighboring the city­­, provides 30 percent of Xalapa’s water supply, while the diverse soil and vegetation around it is a vital store of carbon. But both these natural assets and the city itself are feeling the effects by climate change. Fluctuating temperatures and rainfall patterns are destabilizing the mountain slopes around the city, leading to frequent landslides, while intense rains in the mountains cascade into urban areas below, causing turmoil for the city’s residents.

“Human resilience to climate change depends on ecosystems, and we need urgent measures to protect them," says Isabel Garcia, author of a study examining the climate vulnerability of Xalapa.

In particular, Garcia’s study identified urban expansion–and its effect on the surrounding environment—as an exacerbating factor in the climate-related risks facing the city.

“We have a city that has approximately 20,000 uninhabited homes, because they were built in inaccessible areas, without potable water and drainage services,” Xalapa’s Deputy Director of Planning, Angélica Moya, says.

“We have irregular settlements in areas that should have never been urbanized, and now we have landslides and floods.”

Recognizing both the climate change impacts facing the city and the importance of Xalapa’s surrounding ecosystems for helping its people adapt to these changes, local authorities are now turning to natural solutions. Partnering with the UN Environment Programme (UNEP), they are working to restore and protect large areas of cloud forest around the city under the Global Environment Facility-backed CityAdapt project.

“In Latin America and the Caribbean, where 80 percent of the population lives in cities, we urgently need to shift from vicious cycles of degradation to the virtuous dynamic of resilient ecosystems,” Heileman says.

The CityAdapt project marks Xalapa as the first Latin American city to seize the potential of ecosystem-based adaptation–an approach that uses nature to adapt to climate change. By leveraging the natural environment–like the role of trees in regulating water flow and preventing landslides and erosion—ecosystem-based adaptation can help reduce both flood and drought, and is often much more cost-effective than engineered structures built to serve the same role.

“The main goal of this project is to enhance the capacity of local governments to face the adverse effects of climate change,” Sergio Angón, CityAdapt National Coordinator in Mexico, says.

Within the framework of the project, two reports have already been produced for Xalapa on climate change vulnerability and potential climate scenarios for 2039.

The vulnerability analysis identified areas most at risk from climate change. It also measured the adaptive capacity of the ecosystems that currently provide Xalapa with surface water supply, soil retention and carbon storage.

According to the analysis, Xalapa’s cloud forest—an ecosystem already reduced to just 1 percent of its former range around Mexico—could see temperatures rise by as much as 1.8°C by 2039, impacting biodiversity, as well as potentially increasing the spread and intensity of diseases in the nearby coffee plantations.

But by restoring the forest and working to limit the growing city’s negative impacts on the surrounding environment, CityAdapt is helping Xalapa strike a vital balance between people and nature.

"We need to move Xalapa in an orderly way towards a new model of territorial development, in which resilience is the key focus," Xalapa mayor, Hipólito Rodríguez, says.

Alongside research and forest restoration, CityAdapt is backing other adaptation initiatives, such as enhanced watershed planning, and strengthening local livelihoods.

Rainwater harvesting systems are being introduced in public buildings and schools, ensuring adequate water supplies in the face of increasingly unpredictable rains, while the project is also teaching climate-resilient agricultural practices to local communities.

“This is an opportunity to rethink the way we build a city,” says Angelica Moya.