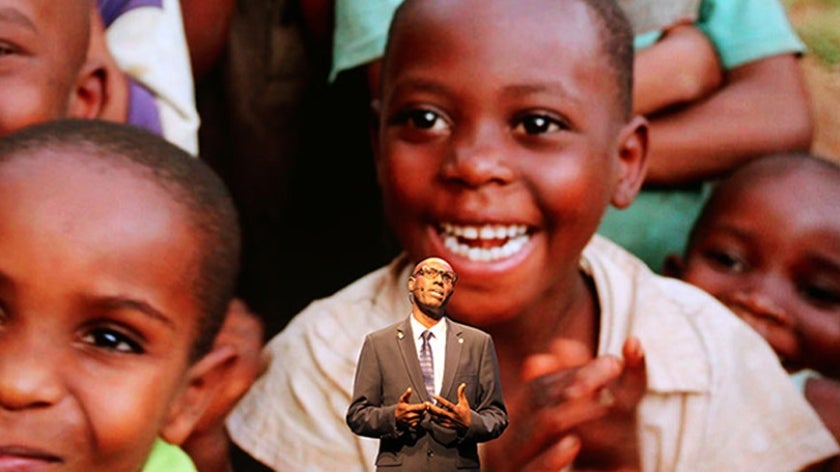 Man speaking on stag with picture of children behind him.

Leonidas Nzigiyimpa, a conservation champion in Burundi, has devoted his life to protecting his fragile country’s natural wealth. Driven by a passion for change, he led the rehabilitation of forests, the protection of chimpanzees and rare species, and the empowerment of indigenous communities adjacent to the Bururi forest reserve. It is for these efforts that Leonidas is a recipient of this year’s National GeographicBuffett Awards for Leadership in Conservation.

“The future of Burundi rests on the preservation of its natural assets,” says Nzigiyimpa, who is Chief Warden of the Burundi Office for the Protection of the Environment. “I have decided to devote all my life to the protection of our natural wealth. Every threat inspires me to continue to restore Burundi’s impressive ecosystems. If we succeed, we guarantee a better future for the generations to come,” added Nzigiyimpa, who was in Washington DC to accept the award.

Burundi’s economy is dominated by small-scale agriculture practiced on the slopes of hills and mountains. The burgeoning population and an overwhelming reliance on natural resources by 90 percent of the population have both caused aggravated environmental degradation. The recent World Bank Country Environment Analysis estimates that each year, almost 38 million tons of soil is lost and land degradation cost 4% of the country’s GDP.

In charge of the protection of Burundi’s forests and protected areas, Nzigiyimpa and dedicated communities have worked with the World Bank/Global Environment Facility - financed Coffee Landscapes Project to bring solutions to a fragile environment. Led by the Burundi Office for the Protection of the Environment and by a desire to transform their own destiny, communities created a management plan for the protected areas, developed educational campaigns, promoted sustainable livelihoods, encouraged research, and called on leading conservationist Jane Goodall to help save chimpanzees and rare species.

“The World Bank is engaged in helping Burundi strengthen its resilience against environmental degradation by working with all stakeholders,” says Nestor Coffi, Burundi Country Manager, World Bank. “Leonidas has led a dedicated team that have been instrumental in bringing change to Burundi’s natural assets."

The project promotes sustainable land management practices and specifically addresses land degradation in coffee landscapes around the forest reserve of Bururi. Coffee, Burundi’s main export crop, brings up to 90% of the country’s foreign exchange and employs about 600,000 families – representing roughly half of the country’s households. But, in the last 40 years, severe land degradation led to a decrease in coffee production from 45.000 tonnes per year to about 10,000 – 25,000 tonnes, deeply affecting people’s livelihoods.

“To make a difference, we must use a holistic landscape approach that makes ecosystems more resilient while transforming communities’ livelihoods and bringing peace and prosperity,” says Paola Agostini, Global Lead for Forests, Landscapes and Ecosystems at the World Bank. “This project has helped change the behavior of communities towards the conservation of the forest reserve and the adoption of shade-grown coffee which brings multiple wins for the environment and for people who depend on the natural resources.”

This form of polyculture uses a canopy of trees that can be intercropped with coffee growing in the shade and taking nutrients and flavor from other plants such as banana, avocado, orange, tangerine, lemon, and even cocoa. By using this approach, the community has diversified its farm products, improved food security and the fertility of the soil, while also tackling soil erosion.

Hoping to further Burundi’s use of conservation as an engine for growth, Leonidas and his team started in 2014 an agritourism community-based initiative allowing farmers to showcase a coffee value chain supporting conservation. A nascent ecotourism was also tried with the rehabilitated thermal springs, new access trails to waterfalls and habituation of chimpanzees.

One of the most impressive achievements of the project has been inclusion of the Batwa indigenous people in the management of the reserve. An innovative approach was used to employ them in the conservation of the reserves that included saving revenues in a communal fund that was then used to buy land. This was the first time in Burundi’s history that a Batwa community was able to buy land with its own funds.

These efforts are contributing to a change in Burundi’s landscapes and livelihoods. The approaches piloted in the project are being scaled up in the recently approved Landscape Restoration and Resilience Project (IDA $ 30 M) and the Coffee Competitiveness Project (IDA $55 M).

“This award gives me more energy to move forward and keep communities, and especially youth involved in conservation efforts,” says Nzigiyimpa. “If we involve young people in environmental protection and in the preservation of our natural resources, we will change our life and our country for the better.”